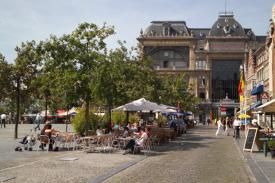 In the NW corner of the Friday Market, the socialist building "Our House" or "Bond Moyson" was built at the end of the 19th century. It was the city hall of the socialist union'. The building was built in the so-called macaroni style', an eclectic whole of all sorts of building styles and forms.

Ferdinand Dierkens, the house architect of the Ghent socialists, who also built the "Vooruit" designed the building. He created spaces for celebration, large department store, movie theatre, a pharmacy, the unionadministration, Health Service Administration,... Most of these activities took never place here. It became especially an administrative building for the socialist health assurance and the socialist union (ABVV). The cellebrations took place at the "Vooruit". This traditions continues even today. This building on the Friday Market is however the center and the cradle of the cooperative of the socialist party "Vooruit" or "Ahead".