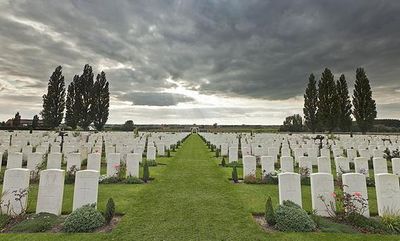 Tyne Cot Cemetery, with its adjacent visitors' centre, is the largest Commonwealth cemetery in the Ieper Salient (in the world, in fact.). Its location near the village of Passendale means that it will forever be associated with the great slaughter that took place there. When the weather is clear, you can see the towers of Ieper in the distance. The battle for the Passendale ridge lasted for three months and cost tens of thousands of soldiers their lives, all for a territorial gain of just 8 kilometres. The plan was to break through to the coast, capturing the U-boats bases at Zeebrugge and Ostend. The Germans recaptured the village in the spring of 1918 and were only driven out again in September, just weeks before the end of the war.

Round the central bunker on which the Cross of Sacrifice is built, you can see that the graves are irregular in pattern. This is the original battlefield cemetery. During the war, and often under fire, there was no time to lay out the graves in neat rows.

After the Armistice, many burials from smaller cemeteries and remains discovered on the old battlefields were brought here. Tyne Cot is now the last resting place of 11,956 soldiers of the Commonwealth and four Germans. The walls of the Memorial to the Missing at the back of the cemetery bear the names of 34,957 soldiers who died after 15 August 1917 and have no known grave.

This memorial is actually an 'extension' of the Menin Gate Memorial in Ieper. When this was built during the 1920s, it became clear that it was not big enough to hold all the names of the missing who were lost in the Salient.