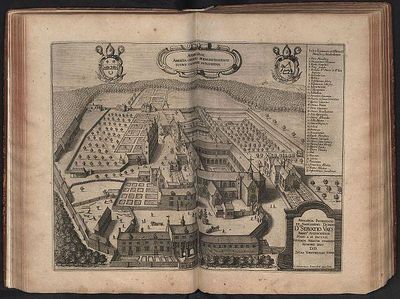 Averbode Abbey is a Premonstratensian abbey situated near Diest , in the Archdiocese of Mechelen-Brussels in Belgium. It was founded about 1134, suppressed in 1797, and reestablished in 1834. Throughout the 20th century the abbey press was a leading children's publisher in Belgium.
Averbode Abbey was founded about 1134–1135 by Arnold II, Count of Loon. With land donations from the Abbey of Sint-Truiden, the lords of Aarschot and Diest, and some years later Godfrey III of Leuven, the abbey was situated right on the border of the County of Loon and the Duchy of Brabant. The first canons and abbot Andreas came from the Sint-Michielsabdij in Antwerp, founded in 1124.