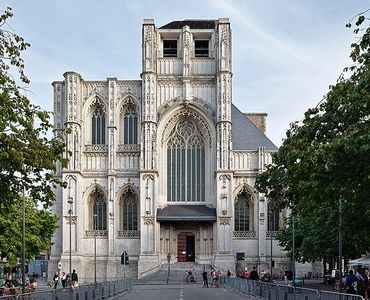 Saint Peter's Church in Leuven, Belgium, is a Roman Catholic church built in the 15th century in the Brabantine Gothic style. The church has a cruciform floor plan and a low bell tower that has never been completed. It is 93 metres long. It is located on the city's 'Grote Markt' , opposite the Town Hall. In 1999, the belfry and bell tower of the church was inscribed on the UNESCO World Heritage List as part of the Belfries of Belgium and France site, in recognition of the civil importance and architecture of the belfries in the region.