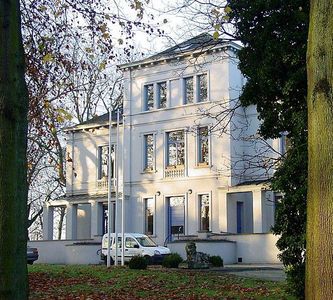 Zaventem is a Belgian municipality in the province of Flemish Brabant. It is located in the Dijleland area, one of the three large recreational areas which together form the Groene Gordel around the Brussels-Capital Region. The municipality comprises the subdivisions or deelgemeenten of Nossegem, Sint-Stevens-Woluwe, Sterrebeek and Zaventem proper. On 1 January 2006 Zaventem had a total population of 28,651. The total area is 27.62 square kilometres , which gives a population density of 1,037 inhabitants per km². The official language is Dutch as it is within the Flemish Region. Zaventem is the home of Brussels Airport, together with neighbouring town of Diegem.

The old spelling of the municipality's name is Saventhem, but the oldest notation of Zaventem is Saventa, which dates from records of 1117. There are several hypotheses on the meaning of the name. One of them refers to the seven pools or small ponds that existed in the area during medieval times. Another one refers to small ponds in a sandy environment . Others interpret the name Zaventem as a reconfiguration of zeven tommen tumuli or burial mounds) or zaaivelden .