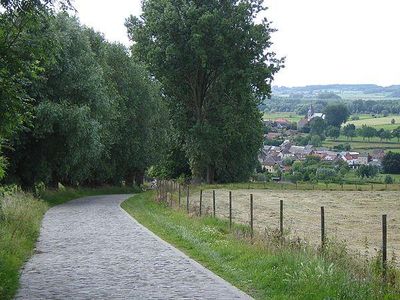 Koppenberg is a 77 m high hill in Oudenaarde, the Flemish Ardennes, Belgium. "Koppen" is an abbreviation for cobblestones which in Dutch slang language are called kinderkoppen, or "children's heads". This climb is part of the route of the Tour of Flanders professional cycling race and feared by many because of its steepness and because of its cobblestones. This makes the Koppenberg difficult even for top professionals. Quite often, riders slow to the point of losing their balance, especially those at the back of the peloton who have to dismount and scramble to the top on foot.

Strategically, the climb has little importance: it's too far from the finish . Even if a breakaway forms on the Koppenberg it is difficult for riders to hold off the peloton in the finishing stages. In the 2012 course change the Koppenberg is moved to 60 km from the finishline and can be more decisive in the Ronde than in the old course.