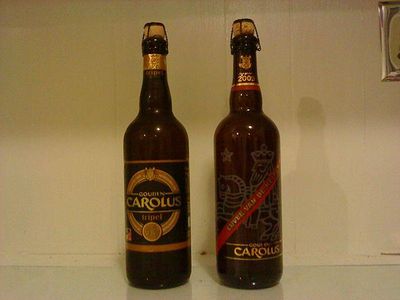 Het Anker Brewery is a Flemish brewery in Mechelen, founded in 1471 by a community of Beguines. In 1872, the brewery was acquired by Louis Van Breedam, who renamed it Het Anker in 1904. Expanding its assortment from lager to ale, it began producing "Emperor beer" after World War II. In 1960 it renamed it "Gouden Carolus" after Charles V, Holy Roman Emperor . They opened a brasserie and a hotel, and in 2010 began producing a single malt whisky, distilled from the Gouden Carolus Tripel.
The company's Lucifer beer was ranked #6 in a 2010 New York Times test of Belgian-style beers. Het Anker is also brewing Dentergems Wit, a wheat beer brewed earlier by Liefmans.