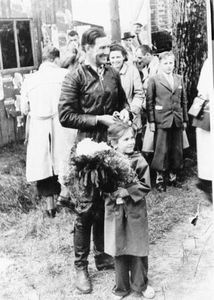 You're standing here in the middle of the village Buzet.

Buzet was part of the 'Circuit de Floreffe' motorcycle track, that was worldfamous between 1925 and 1956, the year that Fergus Anderson died.

The scotsman Fergus Kinloch Anderson (°1909) was one of the first British drivers who came to earn a living on the European mainland.

In 1950 he signed a contract with Moto Guzzi for the 250cc races, but quickly convinced Moto Guzzi to build a 350cc bike.

With this motorcycle, Anderson became world champion in 1953 and 1954, making of Moto Guzzi the first non-english brand that won the championship. Anderson quit racing (at the age of 45 !) to become Moto Guzzi's team manager. A dispute about the management led Anderson to quit the team and start racing again with the competing and ambitious BMW...

On april 29th, 1956, he was 'only' 4th on the Mettet Circuit. He asked to change some minor issues to his motorcycle. On may 6th, he started at the speed race at the street circuit of Floreffe. A couple of miles from the finish, he slipped and crashed against the corner house of the Place de Buzet. He died instantly – although a person who witnessed the accident told me he died in a Namur Hospital.

Moto Guzzi's driver Bill Lomas won the race, but the Circuit de Floreffe was closed down.

Anderson wanted to be burried near the Circuit where he would die. His grave can be found at the Belgrade Cemetery in Namur.

This commemorative plate was inaugurated 40 years after his death.