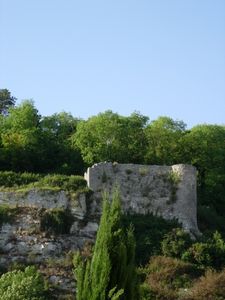 The fortified site of the Samson would seem to have given its name to the village. Only ruins can still be seen today. This defensive site, ideally situated on a promontory overhanging the Gramptinne road, was occupied by the Romans in particular; Julius Caesar apparently established an entrenched camp there. Excavations also revealed the existence of graves, coins together with objects dating from the occupation of the site by the Franks and the Merovingians. Samson fortress was divided into three surrounding walls: a rocky ground, a bailey and outbuildings as well as the castellan’s dwelling and its keep, standing beyond the drawbridge. The inhabitants of the village were exempt from taxes in exchange for a spell of guard of the fortress. The latter was besieged in vain by the Normans in the 9th century. The last siege of the castle took place in the 16th century, during the time of Don John of Austria. The castle was finally demolished on the order of King Charles II of Spain in 1690.

Other free brochures on the history and heritage, museums and discoveries, and nature walks are available at the Tourism Office of the Town of Andenne.