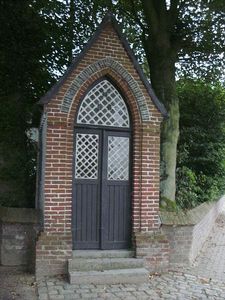 Vlekkem was first mentioned in an official document in 1036. In this charter where the emperor Koenraad II recognized the Abbey Sint-Pietersabdij in Ghent and their possessions, they spoke of "et in Bursinghem et terram in Ottringhem et terram in Flachem". In the year 1209 they spoke of Vleckem. In the opinion of the historian Föstermann, the name of the village is derived from a personal name. At the end of the 18th Century Vlekkem had 55 houses and 275 inhabitants.