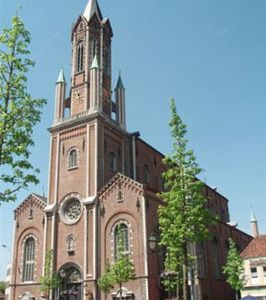 The ancient 12th /13th century church had been demolished and in 1866 the new church was inaugurated with the addition of two lateral naves, a high central nave and a west tower.
A line of columns decorated with statues of the apostles separates the central nave from the lateral ones .The eclectic style combines Romanesque, Gothic and Byzantine elements. Adornment is Neo-Gothic.
The church has paintings from artists such as J Pauwels “Christ dead on his mother’s knees”, Bertolotti “the Assumption”, J B Paggi” Christ, the apostles and Saint Bernard”and one attributed to Hugo Van der Goes “Saint Gregory’s miraculous mass”. The church’s patron saint, Gertrude of Nivelles is depicted in two paintings by Riemaecker and on the baptismal fonts, where she is shown with her sister Begge and her cousin Wilfretrude. Noteworthy are the master altar and its altar piece and the restored organ case. The statues, chandeliers and stoups are from, the old Romanesque church and worth seeing.