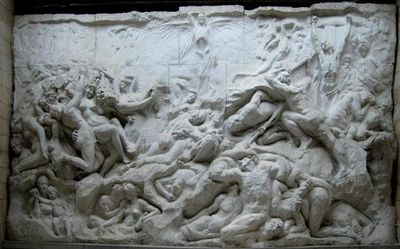 The Temple of Human Passions , also known as Pavillon Horta-Lambeaux, is a neoclassical pavilion in the form of a Greek temple that was built by Victor Horta in 1896 in the Cinquantenaire Park of Brussels. Although classical in appearance, the building shows the first steps of the young Victor Horta towards Art Nouveau. It was designed to serve as a permanent showcase for a large marble relief "Human Passions" by Jef Lambeaux. Since its completion the building has remained almost permanently closed. Since 2014, the building is accessible during the summer time.
In 1889 Victor Horta was commissioned for 100 000 francs to design a pavilion to house Jef Lambeaux's sculpture "The Human Passions" on the recommendation of his teacher Alphonse Balat, King Leopold II's favourite architect.