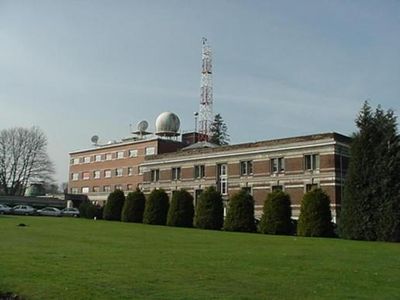 The Royal Meteorological Institute of Belgium is a Belgian federal institute engaged in scientific research in the field of meteorology. The RMI depends on the Belgian Federal Science Policy Office . The Institute is a member of the World Meteorological Organization, of the European Centre for Medium-Range Weather Forecasts, of EUMETSAT, and of the EIG Eumetnet.
In 1823, Adolphe Quetelet obtains from the Minister of Public Education the creation of an astronomical Observatory in Brussels. Meanwhile, are the first meteorological observations done with rudimentary instruments. In 1876, Jean-Charles Houzeau de Lehaie becomes the new director of the Observatory. Quickly, he plans to move the Observatory from the site of Saint-Josse-ten-Noode to Uccle, as well as making from astronomy and meteorology two separate departments. On September 1, 1876, the first Belgian weather forecast was edited, based on the analysis of a synoptic map. In April 1903, the first weather balloon was launched, in order to obtain meteorological observations at a higher altitude. On July 31, 1913, the meteorological service of the Observatory becomes an autonomous institute under the name of Royal Meteorological Institute . Jean Vincent is its first director. From 1914 until 1918, during the German occupation, the RMI stops all activities. It was bombed on August 20, 1914 and rebuilt at the beginning of 1919. In 1919, Jules Jaumotte, astronomer, aviator from World War I and pioneer in the aerial photography, becomes director of the RMI and focuses on the possibility to realize atmospheric soundings in real time. Those new approaches in the study of atmosphere lead to a new science, the synoptic Aerology. In this context, during Belgium’s participation to the International Polar Year in 1932-1933, Jules Jaumotte performs automatic cloud photographs at high altitude by balloons, with a method that links the functioning of instruments to their altitude level. During World War II, the Institute was used by the Nazis as a military observatory and was destroyed by the English troops in 1944. In 1956, the RMI inaugurates the Geophysical Center of Dourbes, which studies magnetism and atmospheric electricity among other fields of research.