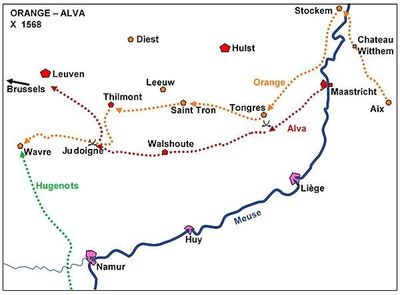 In 1568, the Dutch Revolt had developed into war. During the summer, Louis and Adolf of the House of Orange had fought the Spanish, won the Battle of Heiligerlee, and then lost the Battle of Jemmingen.Prince William of Orange set out to do better in the autumn, by raising a substantial army and invading the Spanish Netherlands.
Since his victory in July at Jemmingen, the Spanish commander Fernando Alvarez de Toledo, Duke of Alba had enforced military discipline on the cities of the Netherlands, so even with protestant leanings there would be little welcome for Orange's army.
Prince William of Orange assembled his army at Aix while the prince and his dignitaries met in Chateau Withem . Setting off on 5 October, the army crossed the river Meuse during the night and on 6 October they occupied the fortified town of Stockem . The next day, the fortified town of Tongres also opened the gates to Orange.Orange's army included German 16,000 foot, 8,000 horse, and French and Low Dutch 2,000 foot and 2,000 horse. The commanders included Orange and his brother Louis, Casimire son of Palsgrame, Count Suarzemburg, two dukes of Saxony: Count Hochstrat and William Lume, and one of the Counts de Marca. Troops in his force include those of Canon Philippe de la Marek, brother of William II de la Marck, Baron of Lummen, Jean d'Haultepenne, Lord Barvéa, Baron of Brandenburg, the young Lord of Haneiïe, Seigneur de Lavaux-Sainte-Anne Everard de Merode, Seigneur du Val, the Lord of Bétho, master of his artillery Guillaume de Prez , quarter-master André Bourlette, Philippe de Neuliorge, Érard Spirinck, Edmond de Marne, his brother Hubert, Bernard de Haccourt, and Guillaume de Crahain.
The problem for Orange was supplies. The small cities that do yield were insufficient to sustain the large army. He had hoped to support his army with supplies from Protestant Germany, that would pass through Liège. However, the Prince-Bishop of Liège, Gerard van Groesbeeck, opposed any help to Orange. The burgomasters of Liège also declined to allow raising of pioneers in the area. Orange had the audacity to write to the Prince Bishop of Liège extorting 100,000 ecus, which was also declined.
On 7 October Alva set out from Maastricht with his army. His commanders included: Don Fadrique de Toledo , Don Fenand de Toledo , Maitre de Camp Marquis de Cetenona Chiappin Vitelli, Berlaymont, Noircarmes, Conte de Meghem, Sre Francisco d’Yvarra , and De La Cressionaire. Alva sent 10 enseigns ahead to reinforce Thilmont . His main army consisted of one squadron infantry under Conte de Meghem, one under Berlaymont and one initially under Alva’s own command, later delegated to Conte de Lalaine. The cavalry units were under their own colonels.
On 9 October the two armies exchanged fire near Tongres.
On 10 October Orange moved on to the fortified town of Saint Tron which, despite the presence in the city of troops sent by Liege, opens its doors. Orange pillaged the abbey of St Tron and compelled the abbot to pay twenty thousand crowns for his ransom.Alva had ordered nearby Leeuw to send its garrison to reinforce Thilmont. That left the Leeuw fortifications defenseless, so when a foraging party led by Orange's brother Louis arrived, it had to yield.
On 12 October, in a minor skirmish, Alva attacks some stragglers of Orange's force, killed 600 of Orange’s army and captured about 100 wagons of baggage.
On 14 October the small village of Konichsem was plundered. Alva further reinforced Tirlemont with Sr de Beauvoir, 6 companies of experienced Walloons, with 700 harquebuses, plus captain Monteros with his company of Spanish mounted harquebuses, to block the road to Brussels where the Conseil d’etat was located. Duc d’Arschot commands the defense at Brussels. Alva also called up 10 companies of Walloons under Jean de Croy, le comte du Roeulx. 15, 16 and 17 October saw more skirmishing around Tongres.Orange was running short of funds to pay the soldiers. The result was a mutiny in which Captain Malburg was killed and Orange himself was lucky to survive as a pistol bullet lodged in the scabbard of this sword.
Moving camp 29 times, Orange sought to confront Alva in a decisive battle, but neither side could maneuver the enemy into battle in a particularly unfavorable position.
Meanwhile, an army of Huguenots, led by Francois de Hangest Sieur de Genlis & d'Abbecourt, had crossed the Meuse near the Fortress of Charlemont , near Givet). Orange and Genlis resolved to meet near Wavre.