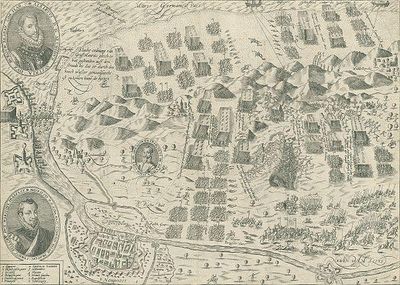 The Battle of Nieuwpoort, was a battle during the Eighty Years War between a Spanish army under Albert of Austria and an army of the Dutch Republic and its protestant allies of England and the Kingdom of Scotland, under the commands of Maurice of Nassau and Francis Vere. It took place on 2 July 1600 near the city Nieuwpoort in what is now Belgium.

The States General under Johan van Oldenbarneveldt had ordered Maurice - in spite of his very strong opposition - to take the army, march south along the coast and take the pirate nest of Dunkirk; the divergence of opinion on this matter between Maurice and Van Oldenbarneveldt, was an early sign that the two de facto leaders of the Dutch Republic were beginning to drift apart; this rivalry would eventually lead to the arrest and execution of Van Oldenbarneveldt in 1619.