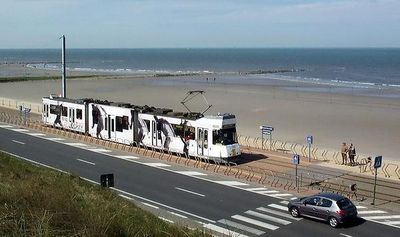 The Coast Tram is a public transport service connecting the cities and towns along the entire Belgian coast, between De Panne near the French border and Knokke-Heist near the Dutch border. At 67 km in length, it is now the longest tram/light rail line in the world, as well as one of the few interurban tramways in the world to remain in operation. The line is built at 1,000 mm metre gauge and fully electrified at 600 V DC.

In 2022, the A Line in Los Angeles, California, United States, will supersede the Coast Tram at 79.0 km as the longest light rail/interurban line in the world.