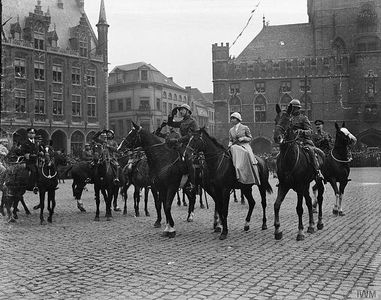 The Battle of Courtrai and the Battle of Roulers ) was one of a series of offensives in northern France and southern Belgium that took place in late September and October 1918.

The Groupe d'Armées des Flandres comprising twelve Belgian divisions, ten divisions of the British Second Army and six divisions of the French Sixth Army, under the command of King Albert I of Belgium, with the French General Jean Degoutte as Chief of Staff, defeated the German 4th Army in the Fifth Battle of Ypres . The breaking of the Hindenburg Line further south, led the Allies to follow a strategy of pursuing the Germans for as long as possible, before movement was stopped by the winter rains. Mud and a collapse of the supply-system, had stopped the advance in early October but by the middle of the month, the GAF was ready to resume the offensive.