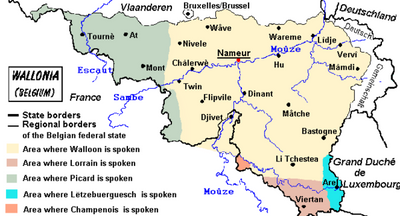 Wallonia , Dutch: Wallonië [ʋaːˈloːnijə] , Walloon: Walonreye Walloon pronunciation: ​[walɔnʀɛj], Luxembourgish: Wallounien, [vɑˈləʊ̯niə̯n]) is a region of Belgium. As the southern portion of the country, Wallonia is primarily French-speaking, and accounts for 55% of Belgium's territory and a third of its population. The Walloon Region was not merged with the French Community of Belgium, which is the political entity responsible for matters related mainly to culture and education, because the French Community of Belgium encompasses both Wallonia and the majority French-Speaking Brussels-Capital Region. The German-speaking minority in eastern Wallonia results from WWI and the subsequent annexation of three cantons that were initially part of the former German empire. This community represents less than 1% of the Belgian population. It forms the German-speaking Community of Belgium, which has its own government and parliament for culture-related issues.

During the industrial revolution, Wallonia was second only to the United Kingdom in industrialization, capitalizing on its extensive deposits of coal and iron. This brought the region wealth, and from the beginning of the 19th to the middle of the 20th century, Wallonia was the more prosperous half of Belgium. Since World War II, the importance of heavy industry has greatly diminished, and the Flemish Region surpassed Wallonia in wealth, as Wallonia declined economically. Wallonia now suffers from high unemployment and has a significantly lower GDP per capita than Flanders. The economic inequalities and linguistic divide between the two are major sources of political conflicts in Belgium and a major factor in Flemish separatism.