RouteYou » Wikipedia » Places of interest » Our Lady of Banneux 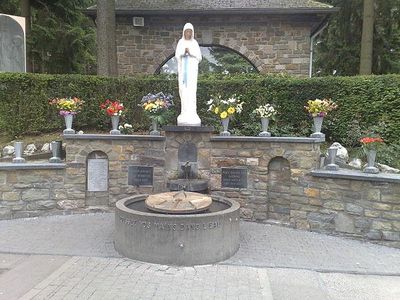 Our Lady of Banneux, or Our Lady of the Poor, is the sobriquet given to the apparition of the Virgin Mary to Mariette Beco, an adolescent girl living in Banneux, province of Liège . Between January 15 and March 2, 1933, Beco told her family and parish priest of seeing a Lady in white who declared herself to be the "Virgin of the Poor", saying I come to relieve suffering and Believe in me and I will believe in you.

Mariette Beco was twelve years old when she reported Marian apparitions in 1933 in Banneux, Belgium, a hamlet about 15 kilometres southeast of the city of Liège. In this case, the Lady in White reportedly declared she was the Virgin of the Poor and said: "Believe in me and I will believe in you."