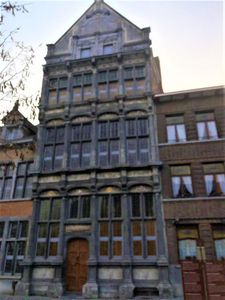 In 1519 the Santvliet building was erected on this site in the Salzhof. This year this building was bought by the fish trade.

Between 1530 and 1535 they built their new craftsmen's house here, the facade of which was designed by Jan van Werchtere. It was given the name "In den Grooten Zalm". It was a representative building in early Renaissance style. Above the door is a salmon in bas-relief and next to the door is a lion's head and Renaissance motifs. The original bluestone bas-reliefs were removed for conservation in the 19th century and replaced by cast-iron copies.

It was not until the city acquired the basic salt right in 1301 that this unloading point was given the name "Zoutwerf". The numerous Gothic, Renaissance and Baroque houses show that this shipyard was one of the busiest and most prestigious trading posts in the city . Here were the craft houses of the Kordewagenaars, salt carriers and fishmongers.