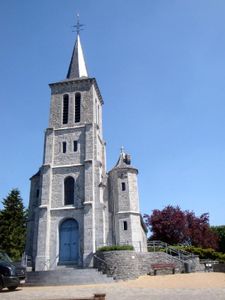 This church is located in Sinsin, in the part that used to be Petite Sinsin.

Grande Sinsin and Petite Sinsin have been a village since French rule.

Sant Jordi is one of the saints believed to have never lived . The first mentions of Joris were recorded hundreds of years after his supposed martyrdom.

As an adult, Joris became a soldier and an officer in Diocletian's army . When he issued a decree ordering the persecution of Christians, Joris refused to take part in the persecution and declared himself a Christian. Then Diocletian had him killed.

According to legend , in 303, George was captured and tortured by Christian persecutors. He was seated on a wheel with double-edged swords, placed in a cauldron of boiling oil , and drunk from a poisoned cup , but he was not injured . Impressed by this miracle, the Empress of Rome was baptized . He was then beheaded in the tower of the city walls along with Joris . All of this would have happened in the "Promised Land".

Saint George is traditionally depicted with a dragon , which tradition says he killed. The dragon is a symbol of paganism. The slaying of the dragon symbolizes the conversion of a pagan country or city to Christianity.

The city was tyrannized by a dragon. Every day he devoured two sheep that were sacrificed to keep him calm. When the last sheep was gone, the dragon demanded human sacrifices. Luck also fell on the king's daughter. She found her death dressed as a bride. But Joris attacked the dragon with a spear and wounded the monstrosity. He promised the king and the people that if all were baptized by him, he would kill the beast. When the king and people agreed, he killed the dragon and 15,000 people were baptized that day.