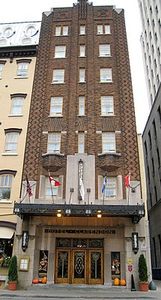 The Clarendon Hotel, or Clarendon House , is a high-end hotel in the historic neighbourhood of Old Quebec in Quebec City, Quebec, Canada. It is the oldest continuously operating hotel in the city.
The original building, on the corner of Rue Sainte-Anne and des Jardins, was a house built in 1858 and designed by Charles Baillairgé. It was built as a four-storey house, and was almost immediately sold to Queen's Printers George-Édouard Desbarats and Stewart Derbishire. The building hosted the printers until 1870, when it became the Russel House hotel, which was sold in 1894, and renamed the Clarendon Hotel. The hotel changed hands again several times until it became part of the Dufour Group hotels.