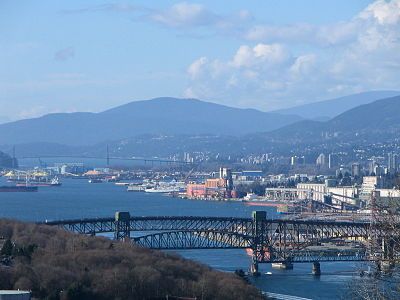 Burrard Inlet is a relatively shallow-sided coastal fjord in southwestern British Columbia, Canada. Formed during the last Ice Age, it separates the City of Vancouver and the rest of the low-lying Burrard Peninsula from the slopes of the North Shore Mountains, home to the communities of West Vancouver and the City and District of North Vancouver.
What is now known as Burrard Inlet has been home to the Indigenous peoples of the Musqueam, Sḵwxwú7mesh and Tsleil-waututh, who have resided in this territory for thousands of years. In 1791, the first European explorers in the region, Juan Carrasco and José María Narváez, sailing under orders of Francisco de Eliza, entered the western part of the inlet in their ship, the Santa Saturnina. They failed to find the Fraser River, mistaking the lowland of the river's delta as a major inlet of the sea, which they named Canal de Floridablanca. This led to one of the prime objectives of the 1792 expedition of Dionisio Alcalá Galiano, which was to determine the exact nature of the Canal de Floridablanca. Galiano spent many days exploring the general area, realizing that there was a great river there and sighting Burrard Inlet itself on June 19, 1792. Just days later, the inlet was again named by Captain George Vancouver, after his friend and former shipmate Captain Sir Harry Burrard.