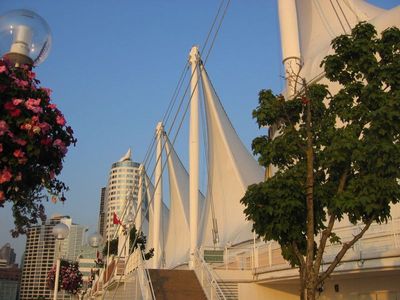 Canada Place is a building situated on the Burrard Inlet waterfront of Vancouver, British Columbia. It is the home of the Vancouver Convention Centre, the Pan Pacific Vancouver Hotel, Vancouver's World Trade Centre, and FlyOver Canada (a virtual flight ride which replaced the world's first permanent IMAX 3D theatre and which ceased operation on October 1, 2009). The building's exterior is covered by fabric roofs resembling sails. It is also the main cruise ship terminal for the region, where most of Vancouver's famous cruises to Alaska originate. The building was designed by architects Zeidler Roberts Partnership in joint venture with Musson Cattell Mackey Partnership and DA Architects + Planners.