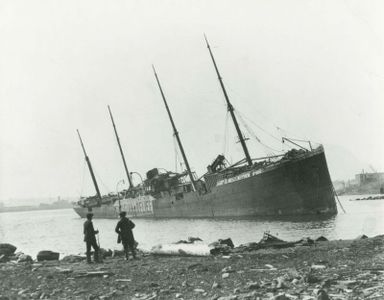 The Halifax Explosion occurred in Halifax, Nova Scotia, Canada, on the morning of December 6, 1917. SS Mont-Blanc, a French cargo ship fully loaded with wartime explosives, was involved in a collision with the Norwegian vessel SS Imo in the Narrows, a strait connecting the upper Halifax Harbour to Bedford Basin. Approximately twenty minutes later, a fire on board the French ship ignited her explosive cargo, causing a cataclysmic explosion that devastated the Richmond District of Halifax. Approximately 2,000 people were killed by debris, fires, and collapsed buildings, and it is estimated that nearly 9,000 others were injured. The blast was the largest man-made explosion prior to the development of nuclear weapons, with an equivalent force of roughly 2.9 kilotons of TNT. In a meeting of the Royal Society of Canada in May 1918, Dalhousie University's Professor Howard L. Bronson estimated the blast at some 2400 metric tons of high explosive.