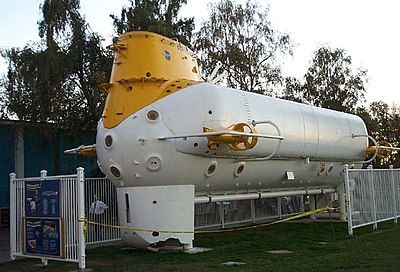 The Ben Franklin mesoscaphe, also known as the Grumman/Piccard PX-15, was a manned underwater submersible built in 1968. It was the brainchild of explorer and inventor Jacques Piccard. The research vessel was designed to house a six-man crew for up to 30 days of oceanographic study in the depths of the Gulf Stream. NASA became involved, seeing this as an opportunity to study the effects of long-term, continuous close confinement, a useful simulation of long space flights.
The Ben Franklin was built between 1966 and 1968 at the Giovanola fabrication plant in Monthey, Switzerland by Piccard and the Grumman Aircraft Engineering Corporation headed by Donald B Terrana, then disassembled and shipped to Florida. The vessel is the first submarine to be built to American Bureau of Shipping standards. With a design crush depth of 4,000 feet , it was designed to drift along at neutral buoyancy at depths between 600 and 2,000 feet . The 130-ton ship has four external electric propulsion pods, primarily used for altitude trimming. It is powered by tons of lead batteries stored outside the hull. Its length is 48 feet 9 inches , with a beam of 21 feet 6 inches and a height of 20 feet . Piccard insisted on 29 observation portholes, despite the objections of engineers over the inclusion of potentially fatal weak points.