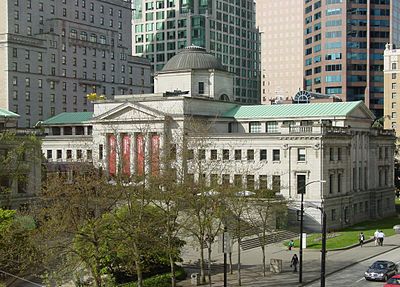 The Vancouver Art Gallery is the fifth-largest art gallery in Canada and the largest in Western Canada. It is located at 750 Hornby Street in Vancouver, British Columbia. Its permanent collection of about 11,000 artworks includes more than 200 major works by Emily Carr, the Group of Seven, Jeff Wall, Harry Callahan and Marc Chagall.
The Vancouver Art Gallery was founded in 1931 and had its first home at 1145 West Georgia Street. In 1983 it moved to the Hornby Street location, the former provincial courthouse. It was renovated at a cost of $20 million by architect Arthur Erickson, which completed his modern three city-block Robson Square complex. The gallery connects to the rest of the complex via an underground passage below Robson Street to an outdoor plaza, restaurants, the University of British Columbia's downtown satellite campus, government offices, and the new Law Courts at the southern end.