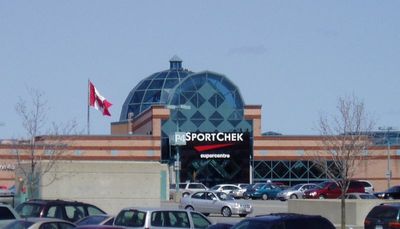 Place d'Orléans is a large shopping mall in the eastern end of Ottawa, Ontario, Canada, in the community of Orléans. The property is about 740,000 sq ft (69,000 m2). It has three large department stores (Sport Chek, Target and The Bay) and about 175 small shops, including a food court. The Bay expanded in 1999, taking over a large section of the north side's upper level, and reducing the number of smaller shops. Other prominent shops included the Market Fresh grocery store (the company pulled out of Ontario, due to declining profits, on December 30, 2005, now Boathouse and Goodlife Fitness fill the vacated space), and, once the focus of the mall, Walmart. In early May 2006, Zellers opened a new store in the large retail space vacated by Walmart. In 2013, Zellers closed and was replaced by Target.