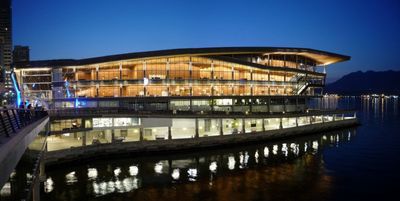 The 2010 Winter Olympics, officially known as the XXI Olympic Winter Games and commonly known as Vancouver 2010, informally the 21st Winter Olympics, were a major international multi-sport event held from February 12 to 28, 2010, in Vancouver, Canada, with some events held in the surrounding suburbs of Richmond, West Vancouver and the University Endowment Lands, and in the nearby resort town of Whistler. Approximately 2,600 athletes from 82 nations participated in 86 events in fifteen disciplines. Both the Olympic and Paralympic Games were organized by the Vancouver Organizing Committee , headed by John Furlong. The 2010 Winter Olympics were the third Olympics hosted by Canada and the first by the province of British Columbia. Previously, Canada hosted the 1976 Summer Olympics in Montreal, Quebec, and the 1988 Winter Olympics in Calgary, Alberta. Vancouver is the largest city to host the Winter Olympics, a title soon to be turned over to Beijing in 2022.
Following Olympic tradition, then-Vancouver mayor Sam Sullivan received the Olympic flag during the closing ceremony of the 2006 Winter Olympics in Turin, Italy. The flag was raised on February 28, 2006, in a special ceremony and was on display at Vancouver City Hall until the Olympic opening ceremony. The event was officially opened by Governor General Michaëlle Jean, who was accompanied by Prime Minister Stephen Harper and International Olympic Committee president Jacques Rogge.