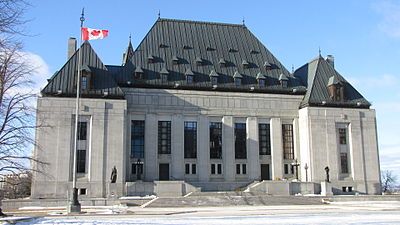 The Supreme Court of Canada is the highest court of Canada, the final court of appeals in the Canadian justice system. The court grants permission to between 40 and 75 litigants each year to appeal decisions rendered by provincial, territorial and federal appellate courts. Its decisions are the ultimate expression and application of Canadian law and binding upon all lower courts of Canada, except to the extent that they are overridden or otherwise made ineffective by an Act of Parliament or the Act of a provincial legislative assembly pursuant to Section 33 of the Canadian Charter of Rights and Freedoms .
The creation of the court was provided for by the British North America Act, 1867, renamed in 1982 the Constitution Act, 1867. The first bills for the creation of a federal supreme court, introduced in the Parliament of Canada in 1869 and in 1870, were withdrawn. It was not until 8 April 1875 that a bill was finally passed providing for the creation of a Supreme Court of Canada.