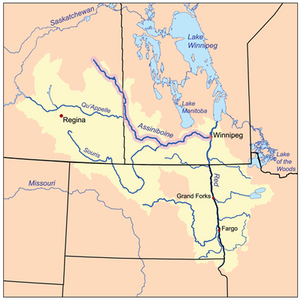 The Assiniboine River () is a 1,070-kilometre river that runs through the prairies of Western Canada in Saskatchewan and Manitoba. It is a tributary of the Red River. The Assiniboine is a typical meandering river with a single main channel embanked within a flat, shallow valley in some places and a steep valley in others. Its main tributaries are the Qu'Appelle, Souris and Whitesand Rivers. For early history and exploration see Assiniboine River fur trade.
The river takes its name from the Assiniboine First Nation. Robert Douglas of the Geographical Board of Canada made several comments as to its origin: "The name commemorates the Assiniboine natives called by La Vérendrye in 1730 'Assiniboils' and by Governor Knight in 1715 of the Hudson's Bay Company 'stone Indians.' Assiniboine is the name of a First Nation and is derived from the Ojibwe words 'asin' a stone and 'bwaan' the Sioux, hence Stony Sioux name was possibly given because they used heated stones in cooking their food."