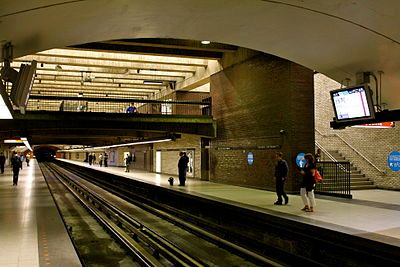 Square-Victoria–OACI station is a Montreal Metro station in the borough of Ville-Marie in Montreal, Quebec, Canada. It is operated by the Société de transport de Montréal and serves the Orange Line. It is located in Victoria Square near the Quartier international de Montréal district. The station opened on February 6, 1967, four months after most of the initial network, and was briefly the terminus of the Orange Line until Bonaventure station was opened a week later.
The station is a normal side platform station; its central mezzanine is connected to a very long tunnel running along Beaver Hall Hill and under Victoria Square, giving access to its various exits.