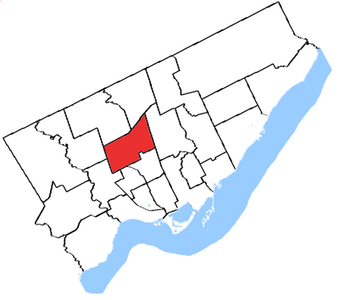 Eglinton—Lawrence is a federal electoral district in Ontario, Canada, that has been represented in the House of Commons of Canada since 1979.
It covers a portion of Toronto northwest of downtown. It stretches from Yonge Street in the east to Caledonia in the west and from Highway 401 in the north to Eglinton Avenue in the south. Lawrence Avenue runs through the centre of the riding. Neighbourhoods in the riding include Bedford Park, Lawrence Manor, Lawrence Heights, the southwestern part of York Mills and the western part of Lawrence Park. The riding includes portions of the former cities of North York, Toronto, and York.