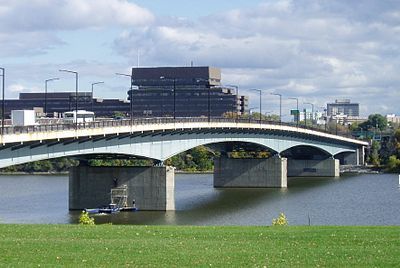 The Macdonald-Cartier Bridge is a bridge connecting Ottawa, Ontario, to Gatineau, Quebec. The bridge is a 618 m long continuous steel box girder bridge and carries six lanes of traffic. It links King Edward Avenue and Sussex Drive in Ottawa with Autoroute 5 in Quebec. It is the easternmost bridge linking Ottawa to Gatineau, running just east of the Alexandra Bridge.
The bridge was built from 1963 to 1965 by the federal government and the governments of the two provinces. It is owned and maintained by Public Works and Government Services Canada. It was named after John A. Macdonald and George-Étienne Cartier, joint premiers of the Province of Canada, and the name is representative of the link between French and English Canada.