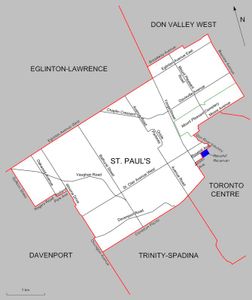 Toronto—St. Paul's is a federal electoral district in Toronto, Ontario, Canada, that has been represented in the Canadian House of Commons since 1935. Its current MP is Carolyn Bennett. Prior to the 2015 election, the riding was known as St. Paul's.
The small but densely populated riding covers the area to the north of Downtown Toronto. In the past, it had been considered a bellwether riding, having been represented by only three opposition MPs. However, like most Toronto-based ridings, the Liberals have dominated recent elections. Since the Liberals won all but one seat in Ontario in their 1993 landslide, they have won all but one election in St. Paul's by 10,000 votes or more.