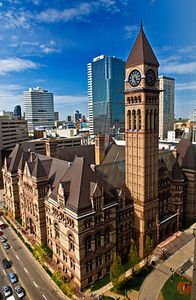 The Old City Hall is a Romanesque civic building and court house in Toronto, Ontario, Canada. It was the home of the Toronto City Council from 1899 to 1966 and remains one of the city's most prominent structures. The building is located at the corner of Queen and Bay Streets, across Bay Street from Nathan Phillips Square and the present City Hall in the Downtown Toronto. The heritage landmark has a distinctive clock tower which heads the length of Bay Street from Front Street to Queen Street as a terminating vista.
Toronto's Old City Hall was one of the largest buildings in Toronto and the largest civic building in North America upon completion in 1899. It was the burgeoning city's third city hall. It housed Toronto's municipal government and courts for York County and Toronto, taking over from the Adelaide Street Court House. York County offices were also located in Old City Hall from 1900 to 1953. With the establishment of Metropolitan Toronto, the county seat moved to Newmarket, Ontario .