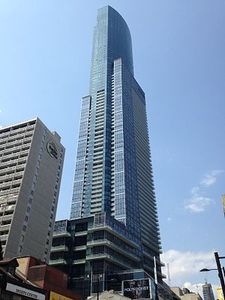 The Aura is a mixed-use skyscraper completed in 2014. in Toronto, Ontario, Canada. It is the final phase of a series of new condominiums near College Park in Toronto's Downtown Yonge district. It is part of the Residences of College Park project. Construction began in January 2010. As of 2016, it is the 6th tallest residential building outside of Asia and the 23rd tallest residential building in the world.
The original design proposed two towers. The building would have featured a ten-storey podium, with two towers on top. The taller tower would have been 60 storeys and 196.5 m tall. The shorter tower would have been 20 stories and 74.5 m tall.