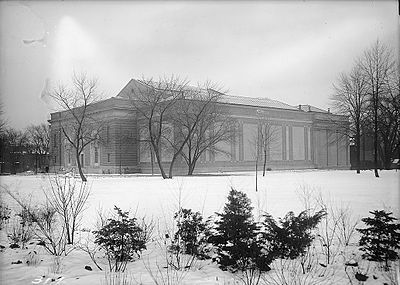 The Art Gallery of Ontario is an art museum in Toronto, Ontario, Canada. Its collection includes more than 90,000 works spanning the first century to the present day. The gallery has 45,000 square metres of physical space, making it one of the largest galleries in North America. Significant collections include the largest collection of Canadian art, an expansive body of works from the Renaissance and the Baroque eras, European art, African and Oceanic art, and a modern and contemporary collection. The photography collection is a large part of the collection, as well as an extensive drawing and prints collection. The museum contains many significant sculptures, such as in the Henry Moore sculpture centre, and represents other forms of art like historic objects, miniatures, frames, books and medieval illuminations, film and video art, graphic art, installations, architecture, and ship models. During the AGO's history, it has hosted and organized some of the world's most renowned and significant exhibitions, and continues to do so, to this day.
Since 1974, the gallery has seen four major expansions and renovations, typically considered a high number and unseen by most galleries of the world, and continues to add spaces. The most recent are the Weston Family Learning Centre, which opened in October 2011, and the David Milne Research Centre, which opened in April 2012. Both projects were designed by Hariri Pontarini Architects. Earlier major renovations were designed by noted architects John C. Parkin , Barton Myers and KPMB Architects , and most recently, Frank Gehry .