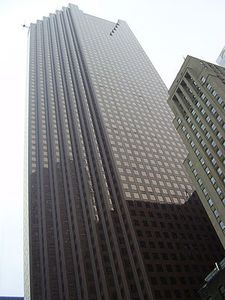 Scotia Plaza is a commercial office complex in the city of Toronto, Ontario, Canada. It is in the financial district of the downtown core bordered by Yonge Street on the east, King Street West on the south, Bay Street on the west, and Adelaide Street West on the north. At 275 m , Scotia Plaza is Canada's third tallest building and the 22nd tallest building in North America. It is connected to the PATH network, and contains 190,000 m2 of office space on 68 floors and 40 retail stores.
Olympia and York developed the complex as an expansion of the adjacent headquarters of Scotiabank and the bank continues to occupy approximately 24-floors of the structure. Olympia and York owned the complex from its completion until the company was liquidated due to overwhelming debt in 1993. Scotiabank led a consortium of banks to purchase the mortgage for Scotia Plaza and over the next five years, it purchased additional shares from its partners until it was the property's majority owner.