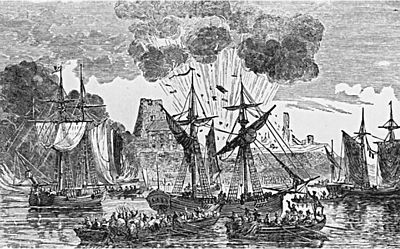 Fort Frontenac was a French trading post and military fort built in 1673 at the mouth of the Cataraqui River where the St. Lawrence River leaves Lake Ontario , in a location traditionally known as Cataraqui. It is the present-day location of Kingston, Ontario, Canada. The original fort, a crude, wooden palisade structure, was called Fort Cataraqui but was later named for Louis de Buade de Frontenac, Governor of New France who was responsible for building the fort.
The British destroyed the fort in 1758 during the Seven Years' War and its ruins remained abandoned until the British took possession and reconstructed it in 1783. The fort was turned over to the Canadian military in 1870–71 and it is still being used by the military.