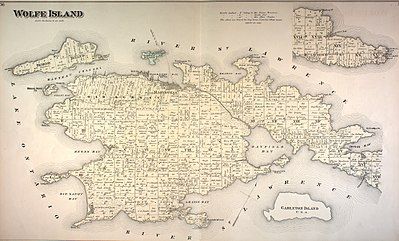 Wolfe Island is an island at the entrance to the Saint Lawrence River in Lake Ontario near Kingston, Ontario. Wolfe Island is part of Frontenac County, Ontario and the Township of Frontenac Islands. It is the largest of the Thousand Islands. The largest community on the island is Marysville. The island was part of the traditional hunting lands of the Tyendinaga Mohawk people and the original name of the island is Ganounkouesnot . It was called Grand Island . In a proclamation by the Lieutenant Governor of Upper Canada John Graves Simcoe on 16 July 1792, the island was renamed from Grand island to Wolfe island,, after British General James Wolfe.
The island is about 29 kilometres long, with its width varying from around 9 kilometres to a few hundred metres at some points; its area is about 124 square kilometres . The resident population is about 1400 people, but this can double or triple in summer. Wolfe Island has its own post office and telephone exchange .