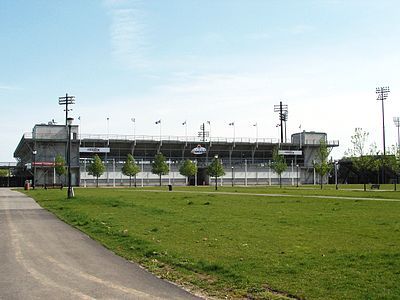 Uniprix Stadium is the main tennis court at the Canadian Open tournament in Montreal, Quebec. Built in 1996, the centre court stadium currently holds 8,000 spectators. It was formerly known as Stade Du Maurier, after the cigarettes brand. It had since been renamed after Uniprix, a major pharmacy chain in Quebec.
The twelve courts at this venue use the DecoTurf cushioned acrylic surface, the same surface as the U.S. Open Grand Slam event. The Canada open is part of the US Open Series of events leading into the Grand Slam event. Uniquely, the Canada Open is held in two cities, Montreal and Toronto, with the men and women alternating venues each year. Uniprix Stadium hosts the WTA in even-numbered years and hosts the ATP in odd-numbered years.