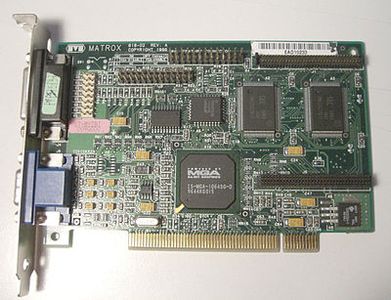 Matrox is a producer of video card components and equipment for personal computers. Based in Dorval, Quebec, Canada it was founded by Lorne Trottier and Branko Matić. Matrox is an umbrella name for two legal entities:
Matrox's first graphics card product was the ALT-256 for S-100 bus computers, released in 1978. The ALT-256 produced a 256 by 256 pixel monochrome display using an 8 kilobyte frame buffer consisting of 16 TMS4027 DRAM chips . An expanded version followed, the ALT-512, both available for Intel SBC bus machines as well. Through the 1980s, Matrox's cards followed changes in the hardware side of the market, to Multibus and then the variety of PC standards.