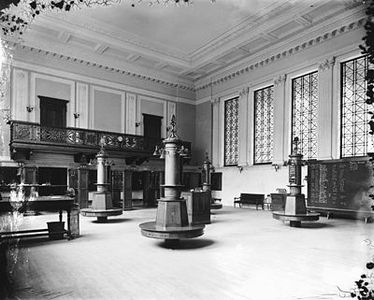 The Montreal Exchange or MX ) is a derivatives exchange, located in Montreal, that trades futures contracts and options on equities, indices, currencies, ETFs, energy and interest rates. Since 1965, it has been located in the Tour de la Bourse , Montreal's third-tallest building. It is owned by Toronto- based TMX Group.
The first exchange in Canada began in 1832 as an informal stock exchange at the Exchange Coffee House in Montreal. In 1874, Lorn MacDougall, along with his brothers Hartland St. Clair MacDougall and George Campbell MacDougall, James Burnett and Frank Bond were the driving force behind the creation of the Montreal Stock Exchange . The shareholders voted Lorn MacDougall its first Chairman of the Governing Committee, a position he held until poor health forced him to retire in 1883.