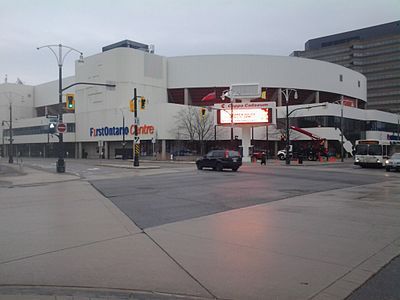 FirstOntario Centre is a sports and entertainment arena on the corner of Bay Street North and York Boulevard in Hamilton, Ontario, Canada. The arena, which opened in 1985, has a capacity of up to 19,000.
Hamilton was left without a large ice hockey arena with the demolition of the Barton Street Arena in 1977, and even that arena had a relatively small seating capacity by modern standards. Copps Coliseum was designed with a large capacity in part to lure a National Hockey League expansion franchise. Construction was started in 1983 and was completed two years later at a cost of $33.5 million, with an additional $2.3 million spent on a parking garage. The project was overseen by local Hamiltonian Joseph Pigott. The arena was originally named Copps Coliseum after long-time mayor Victor Copps, the patriarch of a Hamilton political family which includes his daughter, former Member of Parliament of Canada and Member of Provincial Parliament of Ontario Sheila Copps, and wife, Geraldine, who was a long-time councillor.