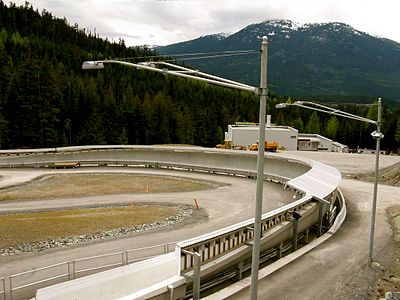 The Whistler Sliding Centre is a Canadian bobsleigh, luge, and skeleton track located in Whistler, British Columbia, that is 125 km north of Vancouver. The centre is part of the Whistler Blackcomb resort, which comprises two ski mountains separated by Fitzsimmons Creek. Located on the lowermost slope of the northern mountain , Whistler Sliding Centre hosted the bobsleigh, luge, and skeleton competitions for the 2010 Winter Olympics.
Design work started in late 2004 with construction taking place from June 2005 to December 2007. Bobsledders Pierre Lueders and Justin Kripps of Canada took the first run on the track on 19 December 2007. Certification took place in March 2008 with over 200 runs from six different start houses , and was approved both by the International Bobsleigh and Tobogganing Federation and the International Luge Federation . Training runs took place in late 2008 in preparation for the World Cup events in all three sports in early 2009. World Cup competitions were held in February 2009 for bobsleigh, luge, and skeleton. The top speed for all World Cup events set by German luger Felix Loch at 153.98 km/h . In late 2009, more training took place in preparation for the Winter Olympics.