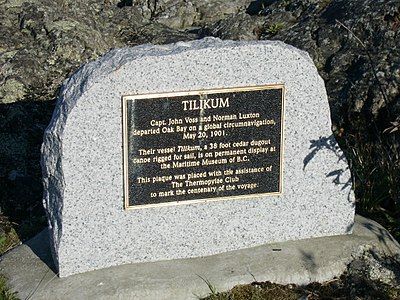 Tilikum was a 38-foot dugout canoe that was used in an effort to circumnavigate the globe starting in 1901. The boat was a "Nootkan" canoe which was already old when she was obtained by captain John Voss in April 1901. The boat was built in the early 19th century as a dugout canoe made from a large red cedar log. Tilikum was purchased for $80 in silver from a native woman in a transference ceremony allegedly sealed by a bottle of rye whiskey - the name Tilikum means "friend" in Chinook jargon. Apparently, John Voss and his companion in this venture, Norman Luxton, were inspired by the voyage of Joshua Slocum, who sailed the 37-foot sloop Spray around the world a few years earlier and wrote a best selling book about his adventures.
The boat was refitted - reinforced, covered and rigged with sail, 230 square feet in total, and readied for her voyage. Tilikum was sailed out of Oak Bay harbour on May 20, 1901, captained by Voss and mated by Luxton. After 10,000 miles and five months on the Pacific Ocean, Tilikum struck a reef and Luxton was thrown from the boat. His whole body was badly cut by coral. The boat limped into harbour at Penrhyn Island in the Cook Islands on 2 September 1901, and Luxton was forced to abandon the trip in Suva, Fiji on 17 October 1901. Tilikum was crewed by 10 more men between that time and when she finally pulled into harbour on the Thames in London, England in September, 1904.