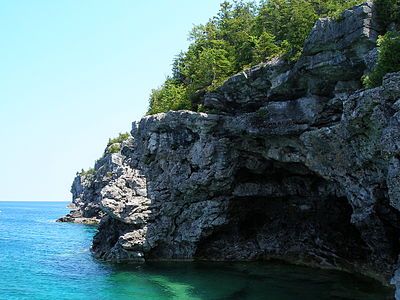 The Bruce Peninsula is a peninsula in Ontario, Canada, that lies between Georgian Bay and the main basin of Lake Huron. The peninsula extends roughly northwestwards from the rest of Southern Ontario, pointing towards Manitoulin Island, with which it forms the widest strait joining Georgian Bay to the rest of Lake Huron. The Bruce Peninsula contains part of the geological formation known as the Niagara Escarpment.
From an administrative standpoint, the Bruce Peninsula is part of Bruce County, named after James Bruce, 8th Earl of Elgin , Governor General of the Province of Canada. A popular tourist destination for camping, hiking and fishing, the area has two national parks , more than half a dozen nature reserves, and the Bruce Peninsula Bird Observatory. The Bruce Trail runs through the region to its northern terminus in the town of Tobermory.