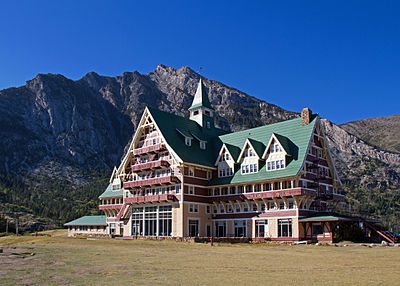 The Prince of Wales Hotel is a historic railroad hotel located in Waterton Lakes National Park in Alberta, overlooking Upper Waterton Lake, near the Canada-United States border. Constructed between 1926 and 1927, the hotel was built by the Great Northern Railway of the U.S. to lure tourists during the prohibition era. The hotel was named after the Prince of Wales , in a transparent attempt to entice him to stay in the hotel on his 1927 Canadian tour, but the prince stayed at a nearby ranch instead.
The Prince of Wales Hotel is the sole establishment among Canada's grand railway hotels built by a U.S. railroad company. The hotel was designated a National Historic Site in 1995.