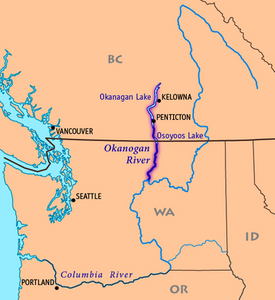 The Okanogan River is a tributary of the Columbia River, approximately 115 mi long, in southern British Columbia and north central Washington. It drains a scenic plateau region called the Okanagan Country east of the Cascade Range and north and west of the Columbia, and also the Okanagan region of British Columbia. The Canadian portion of the river has been channelized since the mid-1950s.
The Okanagan River rises in southern British Columbia, issuing out of the southern end of Okanagan Lake, which is on the north side of the city of Penticton. It flows south past Penticton, through Skaha Lake, past Okanagan Falls, through Vaseux Lake, and past Oliver to Osoyoos and Osoyoos Lake, which spans the Canada–United States border and has its outlet into the Okanogan River at Oroville, on the southern shore of the lake, in Okanogan County. At the border the river's name changes spelling from Okanagan to Okanogan. Average annual flow of the river at this point is 643 cfs .